ASKWEKLAR
Change is the only constant in World History. Sometimes change is gradual, uneventful and perhaps even unnoticed. Other times, change is abrupt, radical, and violent and felt by many. The transition from the post-classical era to the early modern era was wrought with these types of changes. No place were these changes more dramatic than in Western Europe. Breaking free from their feudal period, Western Europe went through dramatic, and at times, violent change to be poised to become a dominant force in the World.

The Renaissance and
The Reformation

How did the different indivuals of theRenaissance affect history? 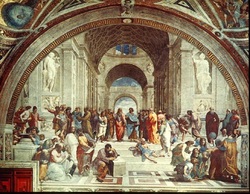 A European Noble recently visited China and attended a dinner party there. He was impressed with event and has returned to Europe hoping to throw a similar party. The Lord has commanded you to organize a dinner party for him.

Your task is to choose the guests, create an invitation, create a seating arrangement, come up with a menu, decide what the guests will be talking about, and organize a show and tell portion of the evening.